SafeChoice helped her find strength, heal and give back

HomeSafeChoice helped her find strength, heal and give back
A- A A+

It took Camille six years to realize her partner was abusing her. “I was in a fog about it,” she says. “It becomes the normal way of living.”

But when she awoke to what was going on–and to the threat to her children–she decided to take back her life.

But after years of victimhood, breaking free of her abuser proved a monumental task. Without help from YWCA Clark County’s SafeChoice program, she might not have made it. And although nearly a decade has passed since she took shelter among her SafeChoice peers, she still finds a way to give back to the program.

Camille grew up in Clark County, but moved to Dayton, OH, to be with the man she loved–or thought she did. The relationship was complicated, and as her partner slowly isolated her from her friends and turned their home into a prison, she became trapped without realizing how it had happened.

What triggered her escape was a marriage counselor’s threat to take away the two children she had with her abuser, who was married to another woman. “When I reported that I had been abused, the counselor said because the kids witnessed it, they had been abused as well. And if I did not leave him, the state would take them away.”

Camille says she fled from Dayton to Portland “with just the clothes on my back” to escape the man. There, friends took her in, and she eventually found her way to SafeChoice.

The stories she heard from the others in her SafeChoice group were powerful and confirmed her experience was not unique. “But I got the most knowledge with the educational class,” she says. “I didn’t know what boundaries were. Learning about boundaries, how to set them, how to maintain them, made me a stronger person.”

She also learned how strong she could be.. She fell in love with a local man, Grant, who, two years into their relationship, was killed in a boating accident. She still feels a deep hole in her heart for him. But she has stayed strong for her children, and for other women in abusive relationships.

Although Camille, who works two jobs, has limited means, she found a way to give back to SafeChoice: Rock the Awareness events. With friends, she began organizing several Rock the Awareness music events, to both raise awareness about domestic violence and raise funds for SafeChoice. The series of annual concerts–in both Vancouver and Portland–have led to donations of nearly $10,000 to SafeChoice. The most recent events were at the Heavy Metal Brewing Co. in Vancouver, which Camille believes will become the SafeChoice fundraiser’s permanent home.

“Someone asked me after Grant’s death what I was doing about domestic abuse,” she says. She had been missing him so much, she says, that the friend’s question suggested to her a way to heal, by giving back to others. “I decided I could do something. And, with the help of a lot of people, I have.”

Rock the Awareness was born. And while Camille will always have a hole in her heart where Grant once lived, that same heart has been enriched by her support of SafeChoice. 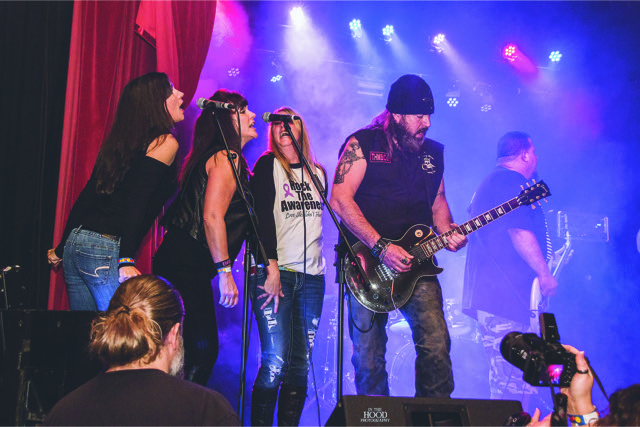 Giving back to others through the Rock the Awareness fundraiser for the YWCA of Clark County  is one way Camille is healing.